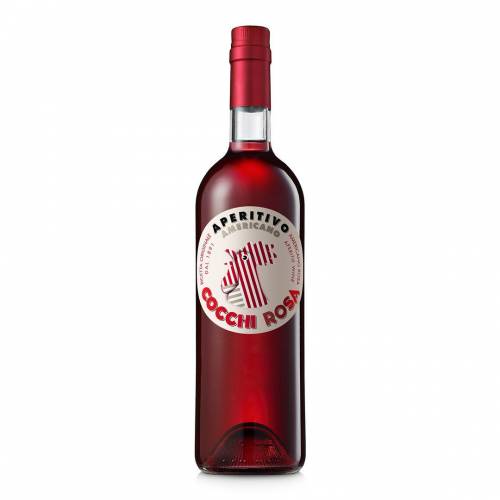 Cocchi Americano is an aromatized wine created in 1891 by Giulio Cocchi and since then produced without interruption according to the original recipe. The name “Americano” is both due to the alcohol made bitter (“amaricato”) by the addition of herbs and spices and to the American habit of drinking vermouth with ice and soda.
Produced according to Giulio Cocchi original recipe, Cocchi Americano is recognized in Asti as the aperitif par excellence – a real piece of history of our town. On its label the original futurist rooster designed in the 30’s and representing his aperitif function (“it awakes the appetite”) as well as one of the symbols of the town of Asti.
During its history, Cocchi has produced some variants to its Aperitivo Americano. The most recent is Cocchi Rosa produced with a base of red wines of Piedmont to which herbs and spices extracts are added, in particular gentian, cinchona, citrus zests and rose petals.

Cocchi Rosa name reminds us that it’s produced with red wines, from which it derives its colour and wild rose notes. Refined with natural extracts of flowers and spices, in particular gentian, cinchona and citrus as per the Americano Bianco but with the addition of saffron, vanilla and rose petals. Its beautiful red colour is completely natural and derives from the wine.

HOW TO DRINK IT:

The classic version foresees a cocktail glass with ice cubes, a spray of soda and a zest of rose grapefruit.
Soda can be pleasantly replaced with ginger beer, lemon soda and tonic water. In its spritz version, Cocchi Rosa is mixed with Brachetto wine and a zest of rose grapefruit or lemon. Garnish it with rosemary.
The combination with spirits such as gin, vodka and mescal is particularly positive. Cocchi Rosa is a perfect ingredient for the new trend of “low octane” cocktails, with a low alcohol content.

Rated 5.00 on the scale 1 - 5 based on 1 customer reviews
Stefan M.
Acquirente verificato